Today’s New York Times has a piece on Sherman Alexie’s new book, “You Don’t Have to Say You Love Me“, an “assemblage of 156 confessional essays, vignettes and poems 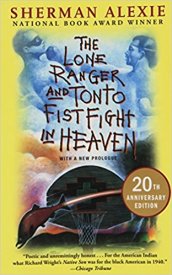 inspired by the death of Mr. Alexie’s mother from cancer in 2015.”

A looo-o-ng time ago I read the award-winning “The Lone Ranger and Tonto Fistfight in Heaven“, a short story collection that featured Victor, a Spokane Indian who grows up on a reservation. Mr. Alexie himself is a Spokane-Coeur-d’Alene Indian. From what I remember the stories were great.

What struck me in the article were two things: what a hard life he’s had (born with hydroencephaly, diagnosed as bipolar, but there’s more–you can read the article to find out), and a quote about his typical reader and his ideal reader:

“When asked whom he considers his primary audience, he responded: “College-educated white women. That’s who buys and reads our books in mass numbers. To say otherwise is to either be purposefully or accidentally a liar. That said, my ideal reader is a poor, weird brown kid. And I get enough letters from them. When a weird brown kid says, ‘This story meant this to me,’ that’s the power.”

Writer, technologist and project manager currently working as a fundraiser for a public school in Brooklyn, New York.
View all posts by gcaroddo →
This entry was posted in memoir, Uncategorized and tagged american indians, sherman alexie. Bookmark the permalink.

A blog about reading, books, and language.

Adventures with great novels around the world

Our way to read together.

The Art and Craft of Blogging